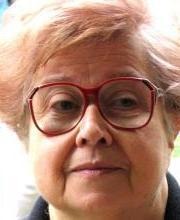 A researcher of Modern Art and Modern Jewish Art. Israel Prize winner for Art History in 2004.>>> Prof. Amishai-Maisels was born in New York. In 1959 she and her family made Aliya, and she studied simultaneously at the Bezalel Art Academy and the Hebrew University. In 1960 she returned to the United States to complete her B.A. and M.A. at Columbia University. In 1962 she returned to Israel and began teaching at the Hebrew University. In 1970 she received her doctorate, Summa cum laude, at the Hebrew University, writing on Gauguin's Religious Themes. She has published many books and articles on Modern and Modern Jewish Art, and in 1993 published her important book, Depiction and Interpretation: The Influence of the Holocaust on the Visual Arts. She continues to work on these subjects after she retired. While working at the University, she was twice Head of the Department of Art History and served as Head of the Institute of Arts, Languages and Literatures and as head of the Institute of Arts and Letters.